Born in the UK, Matthew Harrison is a researcher based in Hong Kong. After studying English at Oxford University he had a brief spell as an English teacher in Germany, and returned to London intending to stay there. But then he met his wife-to-be and they decided to go to Hong Kong. Planning to stay for two years, Matthew has been in the territory for more than thirty. He and his wife have two children.

Matthew is currently focused on science fiction stories and poetry.

Matthew’s literary writing focuses on Hong Kong. Urban life, office politics, and cross-cultural romance are the staple themes of his stories, in which tragedy and comedy are never too far apart.

“That which is right around us we always judge to be everyday and boring; that which is to delight us we seek far away. [But] …The wonderful utopia often lies right at our feet.”

Although I am fortunate to be able to travel far away, my main focus is to explore through art the ‘utopia at our feet’ here in Hong Kong. 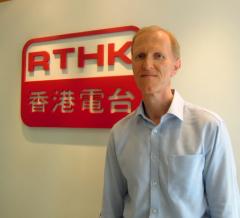 Here are a number of Radio Television Hong Kong (RTHK) Radio 3 interviews that Matthew has carried out to accompany his book launches. If you missed the broadcast, or would like to listen again, just click the play button below for each of the interviews.

All broadcasts are copyright Radio Television Hong Kong (RTHK), and reproduced with their kind permission, June 2012.

1. Matthew interviewed by Phil Whelan on the RTHK Radio 3 Morning Brew program on the 24th March, 2006. (Queen’s Road Central and Other Stories – 15 minutes):

And something else — Goalkeeper training

Matthew likes to play soccer as a goalkeeper when there’s a chance. Here is his video demonstrating goalkeeper training techniques.